Neural networks require a large amount of data to train them. The data used on a neural network can be categorized into two main components: features and labels. Features are the characteristics of each training sample on which the machine learning model gets trained and is able to make predictions, while labels are required to validate the predictions and learn from them in each of the training iterations.

Normalization, in a basic sense, is a technique in which the features and the labels of a dataset are transformed into some scale that makes the training process easier by decreasing convergence time.

Consider an example of a grayscale image that has 255 pixels. 0 represents the black color, and 255 represents white in such an image. Both the colors have equal significance. However, there are huge differences in the pixel value. Since the white color is in a bigger numerical range, the white color will be more dominant when training machine learning models.

There are various normalization techniques used in neural networks. The three most popular methods are:

The formula involved in Min-Max normalization is:

Here, mean and standard deviation are given as: 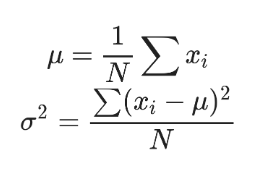 Xi is the input data, N is the number of sample data.

The main advantage of using these normalization techniques is that it is less sensitive to outliers, unlike the min-max normalization.

Batch Normalization is a famous concept in neural network development. Basically, until now, we have been doing normalization only on the input features using min-max normalization and standardization. But, there are activation functions in each network layer when it comes to neural networks.

These activation functions sometimes increase the output of a layer extensively because of which problems like exploding gradients start to occur. Due to this, the neural network becomes unable to learn, and the time for convergence also rises exponentially.

Batch normalization is a technique that enables the user to keep outputs of several layers on a mini-batch and normalize them. The mini-batch can have sizes of 8, 32, and 64 items, generally.

In the above figure, we can see a neural network with one node marked red. It indicates that the node has a large value that can affect other layers. So, if the output of the red node is taken with a few other nodes in a batch and performed standardization using the following formula, the process is called Batch Normalization.

This type of normalization method is considered costly because the various iterations have to be saved in memory and normalized at the very end. To optimize these issues, PyTorch CPU optimization techniques can be used to work in parallel on multiple iteration operations of a batch and make the performance faster.

It can be difficult to decide which normalization technique to choose. However, when it comes to having data under a range between 0 and 1 along with speedy execution when there are no outliers present, min-max normalization is the one to go with.

Similarly, standardization and batch normalization are quite similar in operation, and they can work on data with outliers but may not work as fast as the min-max normalization. There are other normalization techniques like group normalization, box-cox transformation, etc, and each have unique

4 Ways to Save Tax by Investing in Property

5 Industries That Call for Having Access to Warehouse Space